How do student outcomes vary by educational disadvantage?

There is a range of degree outcomes across the educational disadvantage quintiles. Graduates from quintile 1 the (lowest participation quintile) have the lowest proportion gaining a first or upper second class degree, 73 per cent of graduates, compared with 83 per cent of graduates from quintile 5 (the highest participation quintile).

The gap between quintile 1 and quintile 5 has remained at 10 percentage points since 2013-14. The gaps between all other quintiles have also remained comparatively stable over this time.

Among graduates with BTECs, the gap is wider ranging, from zero for graduates with MMM and below, to eight percentage points for quintile 5 graduates entering with D*D*D. 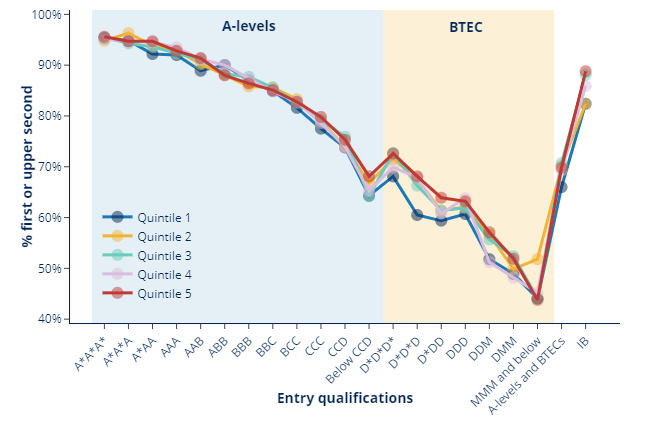 Once the other factors are taken into account, the unexplained difference between quintile 1 and quintile 5 has reduced to two percentage points. It can be seen that a lot of this decrease in difference is explained by entry qualifications.

The trends are different across degree classifications. There is little difference for graduates with a first class degree, but the difference is nine percentage points for those with a third class degree. Therefore, class of degree is not the only factor affecting the difference between these rates. 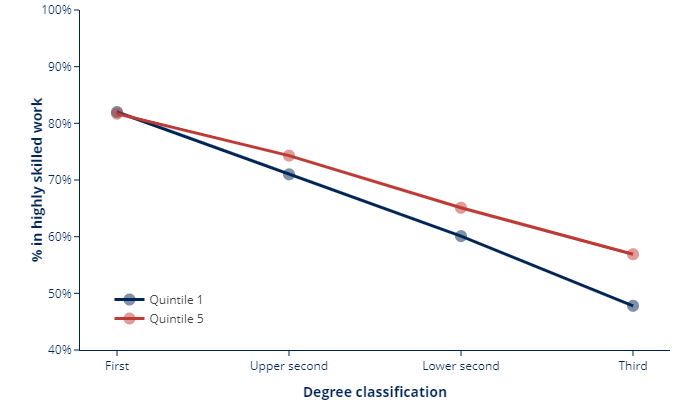