Students who answered the survey were linked to the Destination of Leavers from Higher Education (DLHE) survey results to investigate what respondents are actually doing six months after graduation. We managed to obtain this information for more than 73 per cent of the Intention After Graduation Survey respondents. Students’ intentions were reclassified to be consistent with possible destinations listed in the DLHE. 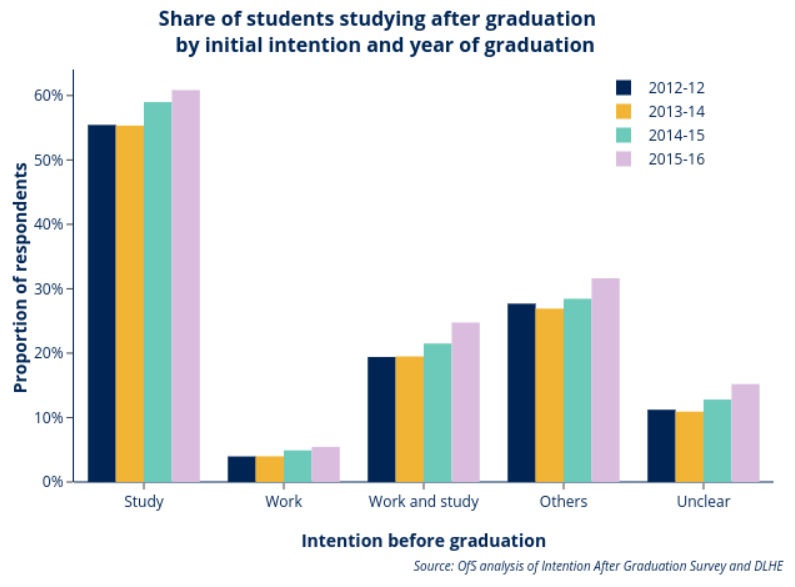 From 2016-17, non-income-contingent loans of up to £10,000 have been available for the first time for students on postgraduate masters’ courses, and may have contributed to the large increase in postgraduate (PG) entrants in 2016-17, as our findings show.

2015-16 graduates have been the first cohort of students able to use this source of funding to enrol on a PG course. Interestingly, among them, the proportion who expressed their intention in the Intention After Graduation Survey to study at postgraduate level and then actually went on to further study is almost two percentage points higher than the corresponding proportion of 2014-15 graduates.

An even larger increase (five percentage points) can be observed between 2014-15 and 2015-16 for students from lowest-participation areas (quintile 1 in the Participation of Local Areas (POLAR4) classification). For them, the proportion of those who are working after graduation work dropped from roughly 31 per cent in 2014-15 to 23 per cent in 2015-16.