An event to highlight the particular opportunities for adult learning in higher education as we emerge from the pandemic and how OfS regulation and funding will influence this. 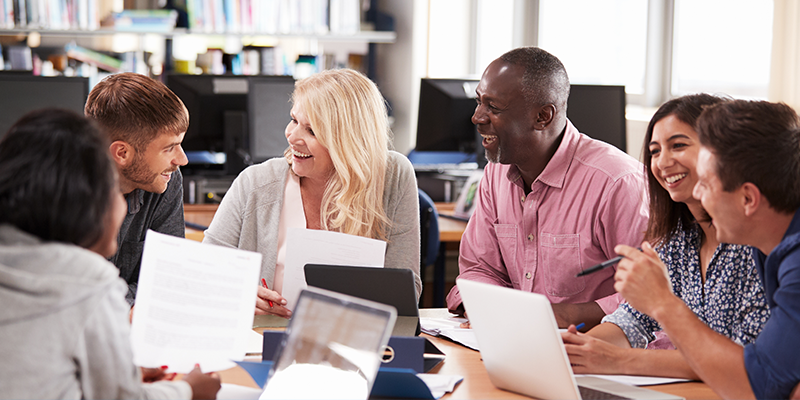 The event explored approaches for ensuring the higher education sector is accessible and responsive to the needs of adult learners. Keynotes from Michelle Donelan MP, Minister of State for Universities and Lord Bilimoria of Chelsea CBE DL considered what the government’s new lifelong learning policy means for adult learners and how higher education and industry working together can develop a workforce for the future. We also looked at the impact of COVID-19 on these students.

These presentations were followed by a panel discussion and audience Q&A on ‘what opportunities and challenges do universities, colleges, employers and local communities face in improving access to higher education for adult learners?’.

The panel was chaired by Brooke Storer-Church, Head of Skills, OfS.

The event concluded with a keynote from Chris Millward, Director for Fair Access and Participation at the OfS, to reflect on how the OfS is using its regulatory powers and functions to address the decline in adult learner participation and the opportunities that lie ahead.

See timings for the event

Nicola Dandridge took up her role as the first chief executive of the OfS in September 2017.

The OfS was fully established in April 2018 and is the public body which regulates the higher education sector on behalf of students.

The OfS aims to ensure that every student, whatever their background, has a fulfilling experience of higher education that enriches their lives and careers.

Prior to joining the OfS, Nicola was chief executive of Universities UK, the representative organisation for the UK’s universities.

Before that she was chief executive of the Equality Challenge Unit, the higher education agency which promotes equality and diversity for staff and students. Nicola started her career as a lawyer working in private practice.

Lord Wharton, Chair of the OfS

Lord Wharton was made a life peer in September 2020 and was, until recently, the Chair of Hume Brophy UK Communications.

He was elected as an MP in 2010 and served as the Parliamentary Under Secretary of State for International Development from July 2016 to June 2017, and as Parliamentary Under Secretary of State at the Department for Communities and Local Government, with responsibility for Local Growth and the Northern Powerhouse, from May 2015 until July 2016.  Prior to that he worked as a solicitor.

He is the founding Chairman of the UK India Business Council, a Deputy Lieutenant of Greater London, and a former Chancellor of Thames Valley University (now the University of West London), becoming the youngest university chancellor in the UK when appointed.

In 2006, Karan Bilimoria was appointed the Lord Bilimoria of Chelsea, making him the first ever Zoroastrian Parsi to sit in the House of Lords. He is an Honorary Fellow of Sidney Sussex College Cambridge and was Chair of the Advisory Board of the Judge Business School, Cambridge University, from 2015-2020, and subsequently appointed as an honorary Ambassador. He qualified as a Chartered Accountant with Ernst & Young and graduated in law from the University of Cambridge.

In July 2014, he was installed as the seventh Chancellor of the University of Birmingham, making him the first Indian-born Chancellor of a Russell Group University in the UK. He is the President of the UK Council for International Students Affairs (UKCISA) and since 2017 has been a Bynum Tudor Fellow at Kellogg College, University of Oxford.

In June 2020, Karan Bilimoria was appointed President of the Confederation of British Industry (CBI).

Michelle Donelan was appointed Minister of State for Universities at the Department of Education in February 2020.

Jo lives in Cornwall and is a proofreader and published author. She was 47 when she started studying for a part-time English Literature degree with the Open University, juggling work and family commitments with her studies.

A passionate supporter of life-long learning, for many years she has provided academic support to a wide variety of higher education students of all ages and abilities. She strongly believes higher education should be available to all and is, therefore, very proud to represent mature students on the OfS student panel.

Liz trained as a research biochemist and has over 30 years’ experience as a university educator and leader. Liz is an Australian National Teaching Fellow and a Principal Fellow of Advance HE (UK) and has led national projects on curriculum renewal for science courses, work-integrated learning and teaching and learning leadership.

At UCL, she is Deputy Director of the Centre for Global Higher Education, an international research centre funded by the Economic and Social Research Council.

Claire’s research and writing focus on higher education student finance and its consequences. She has contributed to some of the most significant UK inquiries into student funding, and presented evidence to various Parliamentary Select Committees.

She was a New Century Fulbright Scholar at the Harvard School of Education from 2007-2008. In 2017, she was awarded an OBE for services to higher education.

She is currently conducting research on student loan debt, examining its influences on graduates’ post-graduation behaviour and life choices with colleagues from the University of Michigan and the University of Twente.

Professor Reid MBBS FRCOG trained at the Royal Free in London and was appointed a consultant Obstetrician and Gynaecologist there prior to moving into Postgraduate Medical Education as, firstly, an Associate and then Post-Graduate Dean in London.

Wendy has held several national roles including that of Clinical Advisor to the Department of Health on the European Working Time Directive, a contributor to the Temple Report, a former Vice-President of the Royal College of Obstetricians and Gynaecologists and former President of the National Association of Medical Personnel Specialists (NAMPS).

Appointed as National Medical Director of Health Education England (HEE) in 2013, Wendy subsequently took on the additional role of HEE’s Executive Director of Education and Quality.

Wendy now enjoys this multi-professional role and the opportunities it gives HEE to deliver a better healthcare workforce and health improvements to the patients and public of England through high quality education and training.

The founder of two ventures in online media and a data-driven marketing consultancy, she is also the chair of equality and inclusion charity, Diversity UK; a trustee of the Science Museum Group; a non-executive director of the Intellectual Property Office (IPO) and a council member of The Open University (OU).

She is an ambassador for entrepreneurship, innovation and technology and has been recognised with many accolades, including an MBE for services to the creative industries in 2009, the Queen’s Award for Enterprise Promotion in 2015, and an Honorary Doctorate by The OU in 2017, in recognition of her efforts to promote diversity and inclusion in science and technology.

Dr Brooke Storer-Church is the Head of Skills at the Office for Students, with responsibility for developing and managing strategic activities within the Access, Inclusion and Skills Directorate.

Previous responsibilities included developing and managing the Degree Apprenticeship Development Fund, working with DfE on the introduction of the Institutes of Technology, and overseeing postgraduate policy and programmes for HEFCE.

Chris Millward is the first Director for Fair Access and Participation in the Office for Students.

His role is to help students and communities throughout England by ensuring that universities and colleges are doing all they can to support underrepresented groups to access and succeed in higher education, and to progress into successful careers. Chris is also an executive member of the OfS board.

Chris started his career at the universities of Warwick, Edinburgh and Durham, then joined the Arts and Humanities Research Council as Head of Research Programmes.

Prior to the establishment of the Office for Students in 2018, Chris was Director of Policy at the Higher Education Funding Council for England (HEFCE).

Email [email protected] with any questions.

Closed captions were available during the live broadcast. The event was recorded and is available above.