Start to Success is a whole community approach to supporting student transitions into, through and beyond university. The campaign brought individuals, organisations and businesses together to help prevent suicide in Staffordshire. 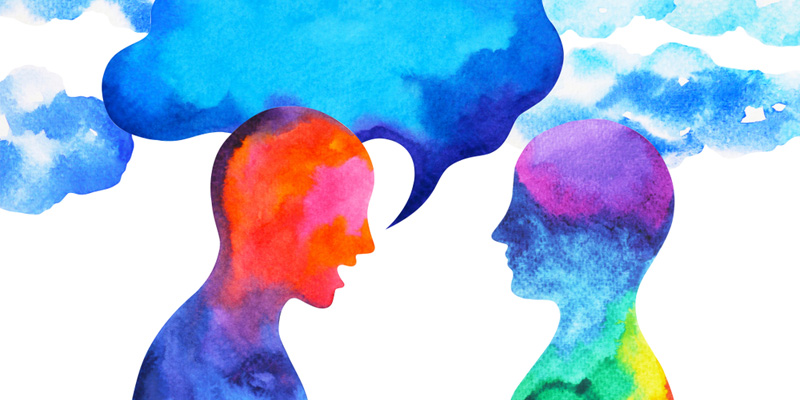 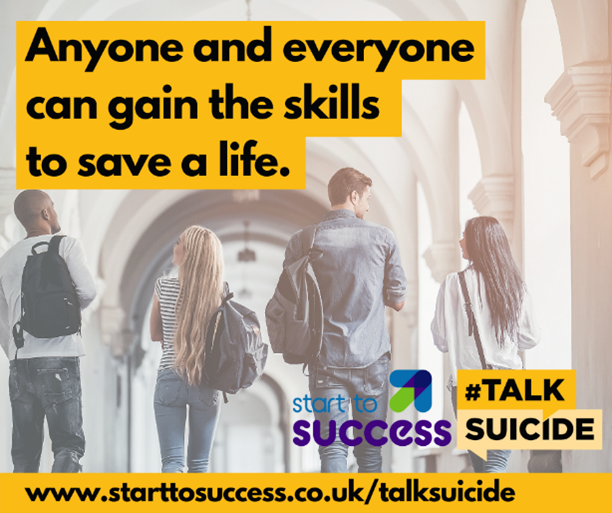 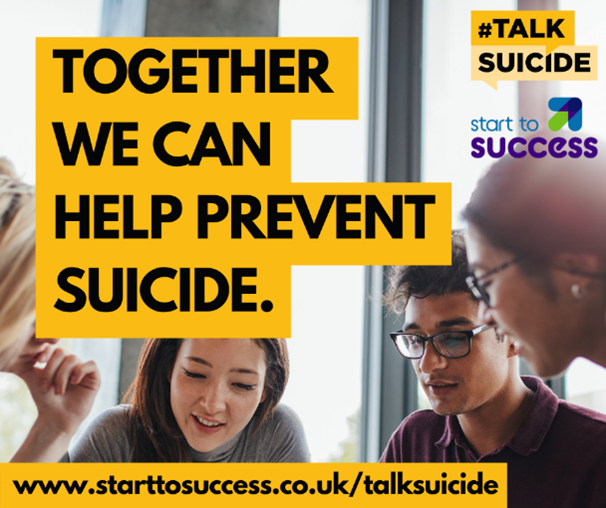 This campaign fits into the wider suicide prevention strategies of both universities which include a university-wide health and wellbeing strategy, comprehensive staff training framework and streamlined pathways to support and engagement monitoring software to detect disengagement early.

The project is working in partnership with the universities and local community partners to help prevent suicide by:

Nearly one in four young people will experience suicidal feelings at least once in their lives, and one in 20 will try to take their own life. Suicide is the biggest cause of death in young adults and only one in three people who die by suicide are known to mental health services (Universities UK, 2018). This is why it was particularly important for the Start to Success project to deliver this campaign within local higher education and further education (FE) settings.

The campaign was aimed at all members of the Keele and Staffordshire University communities including staff and students. The campaign was further adapted to be appropriate for younger audiences within FE organisations by the FE Liaison Officer, Laura. This involved providing a variety of opportunities for students to share their feelings with peers in a safe, controlled environment.

The social media campaign was designed with the marketing teams at the colleges to ensure that the tone and feel was age appropriate and that students were safeguarded effectively with students being signposted to relevant support services and having clear procedures so that students are able to disclose information about themselves or peers that they may be concerned about.

The campaign had to be delivered virtually due to COVID-19 restrictions; however the project utilised all appropriate digital communication channels to share the key messages including newsletters, emails and social media.

What took place, what worked well and why?

The information in the emails was supported by a strong social media campaign across all university digital channels which shared the key messages from the emails but also focused on spotting warning signs and myth busting. The content was based on established research and on the results of the University Student Wellbeing Survey conducted by an independent organisation.

The universities’ staff were also targeted through the campaign via relevant staff intranets and forums. Similarly, articles were posted weekly over a five-week period mirroring the schedule used for the students.

The only addition was signposting to the Suicide Awareness and Prevention training being delivered by North Staffs Mind to staff across both universities through Start to Success. This presented a second training opportunity alongside Zero Suicide Alliance.

The project worked closely with the universities' Counselling and Mental Health teams to ensure that the messaging was appropriate for the student population and that they were aware of when the emails and social media campaign would be launched to prepare for a potential increase in referrals as a result of the campaign. It also signposted to support services outside of the universities to ensure students had the option of services to find what would be most appropriate for them, and also to avoid overwhelming on-campus services.

As the key messages had been developed by Staffordshire Council, and adapted for a student audience it was important that the messaging was relevant to this age group. We utilised the UUK Suicide Safer Universities guidance to adapt the content but also worked with our Student Advisory Panels across both universities to ensure the content was appropriate and engaging. The Student Advisory Panels also supported with the branding of the campaign.

What have been the barriers or challenges?

The key challenge was the sensitivity of the topic area and careful consideration of how this would be shared with members of our higher and further education communities at a time of enhanced psychological distress due to the coronavirus pandemic. Reminders were given throughout the campaign that students could access support through the university and the students' union.

The project team worked closely with the Strategic Communications Teams at both universities to mitigate the effects of any unintended negative impacts.

One way this was done was through consistent trigger warnings on all posts related to the campaign. Only key information was included in emails and posts, and people were signposted to the website for further information so as to not overwhelm students with information on the topic.

Unfortunately, due to the way the mailing lists at the universities work, it was not possible for students to opt out of the campaign, however this would have been an ideal approach and recommendation for other contexts if possible.

Due to the coronavirus pandemic, the campaign was entirely virtual. Whilst this was a new way of launching a campaign for the project team, the advantages of this method far outweighed the disadvantages.

Firstly, the universities knew that every student was reached through the campaign via email. It also meant that campaign analytics were able to be captured to assess impact.

What was the result?

Overall, the universities posted 26 social media posts. This reached an audience of 275,700 people and made 32,300 impressions. Across Twitter, in total there were 30 retweets and 97 likes. The top post was by Staffordshire University which has a reach of 38,200 and 22 clicks. 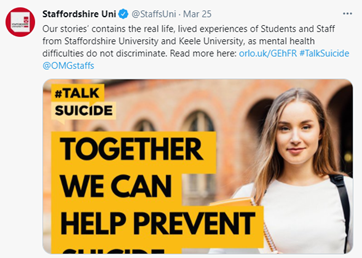 In total, all staff-facing posts had 427 clicks, reached 562 staff and made 1,131 impressions. Sixteen members of staff and 136 students clicked through to the Zero Suicide Alliance training.

University staff reported anecdotally that the campaign had encouraged them to realise that mental health was everyone’s responsibility and that they felt more encouraged to attend the Mind training on offer.

Could the approach be replicated?

The approach could easily be replicated across the sector. If conditions allow, it would be favourable to run in-person activities alongside the digital communications, such as information stands, talks, training sessions and panel events.

Is there evidence of sustainability beyond the lifetime of the project?

The campaign will be embedded into the campaign roadmaps for both universities going forward and will target suicide awareness days or mental health awareness campaigns. Key stakeholders for sustainability will be Students’ Union Officers and Student Services (e.g. Counselling and Mental Health Teams, Res Life Teams and Student Support Teams).